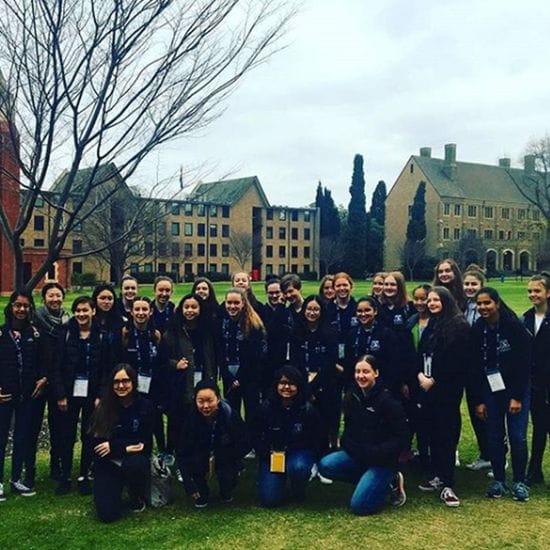 Having just completed subject selections, the discussion of future studies and career choices becomes a recurring conversation amongst many Mac.Robbians. Many of us, are just naturally intrigued and are quick to ask, "What's next?" for another person. The STEM (science, technology, engineering and maths) field, is an uncommon response received from asking that question at school. With many of us at Mac.Rob, choosing to pursue law, medicine, or other fields instead. With many of us, even oblivious to its meaning and purpose.

During, the Term 2 holidays, I was fortunate enough to attend the Girl Power in STEM Camp at The University of Melbourne, with 30 other girls from different schools across Victoria, who all shared an interest in the field. The camp opened my eyes to the many areas of engineering and their possibilities, through undertaking the interactive workshops and talking to professionals in this field. I chose to apply for this for two main reasons; as I wanted to learn more about the STEM field (especially through a woman's perspective), and to hopefully use the knowledge that I gained to encourage you to pursue a career in this field and debunk the many myths about it. More women are needed in this field as currently, it is very male dominated, with women only making up less than one-fifth of Australians qualified in science, technology, engineering and maths. But why is this so?

Some reasons that I think cause the lack of girls in the STEM field are, the fact that many girls slowly lose interest and confidence in these subjects, the many myths about it, or simply because their lack of knowledge regarding the actual occupation. As I mentioned before, through the camp I learnt that there are many areas of engineering, which extends beyond manufacturing cars and building software, unlike what most people believe. A general definition for an engineer is someone who designs, analyses and solves problems in the most efficient way. The camp exposed us to the many areas of this field such as; environmental engineering (through a renewable energy workshop in which we tested out the efficiency of different wind turbine designs), chemical engineering (through a lecture highlighting the lecturer's experiences on the South Pole cleaning up the waste and oil spills left there), civil engineering (through a bridge building activity), electrical engineering (through making Arduino circuit boards), and much more. Additionally, these workshops also showed that engineers can help solve real world issues and demonstrated the real world applications of science, maths and technology, such as creating a reliable and cost efficient water filtration systems for those in remote or developing areas (which was actually one of the workshops at the camp).

If there's one thing I want you all to take from this article is that, you should consider pursuing a career or your further studies in the STEM field, as it is truly a field that encourages discovery and curiosity, can be used to solve the world's major problems and potentially, and also embraces one's creativity and ideas. Furthermore, this field also needs more female engagement, as it is important to include our opinions and input on projects that could potentially shape our future. So once again I encourage all of you to learn more about this field and perhaps even develop an interest in it, and in the future consider answering the question, "What's next?" with it!